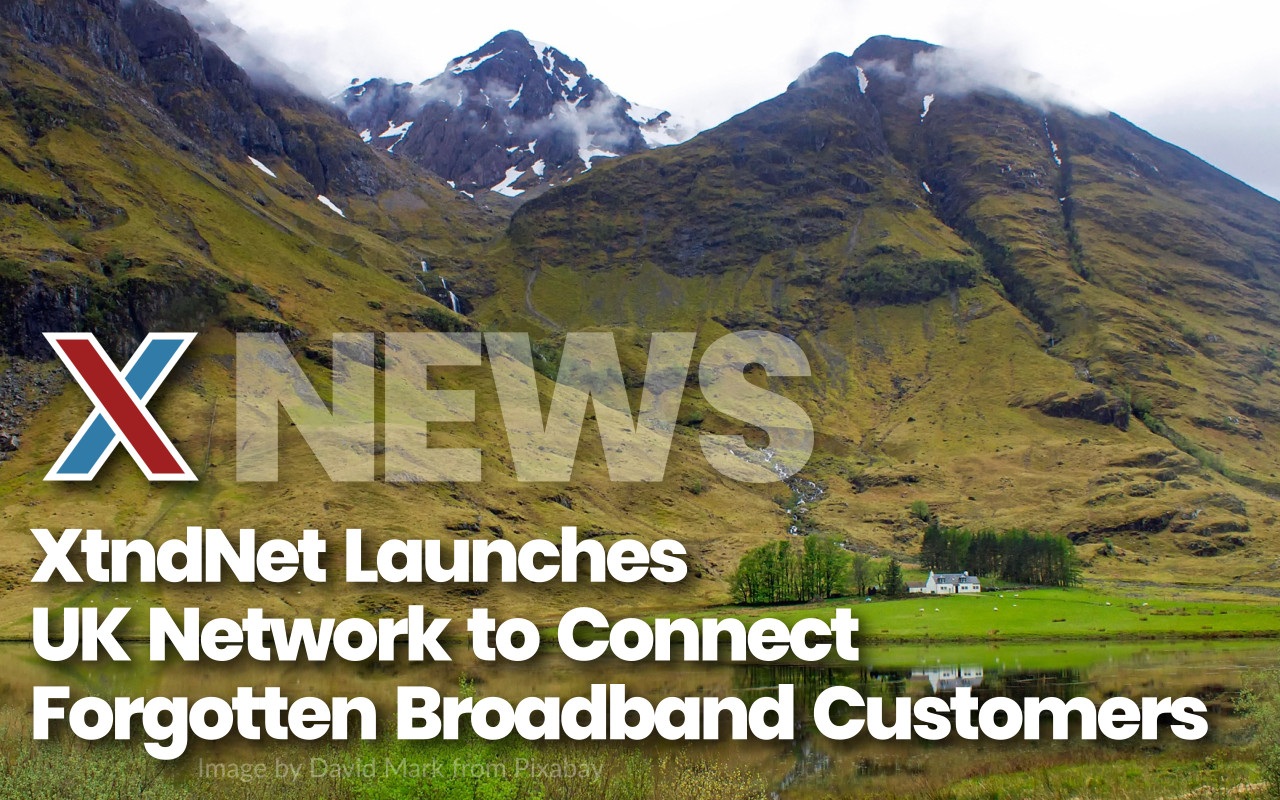 The UK has been the bottom in rural broadband league tables for years, and the government estimates that more than 500,000 properties cannot currently reach the Universal Service Obligation standard of 10 Mb download. Recently, Openreach, a division of BT responsible for providing infrastructure to the majority of the broadband customers in the UK, has suspended community-based infrastructure improvements until an unspecified future date. More than half a million customers who have poor, unreliable broadband have no real solution to improve their connectivity.

Arabsat, Developing Infrastructure, and Forsway are pleased to announce the formation of XtndNet, a radically new broadband ISP targetting under-connected customers. XtndNet offers a hybrid service, combining ADSL, mobile Internet, and satellite connection — the XtndNet 12 Gigabit Space Superhighway — to deliver an affordable, fast, and reliable broadband connection. The service is available now in the United Kingdom and Ireland, and will expand to Germany, Scandinavia, the Baltics, and Africa in the next few months.

Powered by Arabsat’s BADR-7 High Throughput Satellite, based on Forsway’s Xtend platform, and designed and headed by speciality consultants from Developing Infrastructure, XtndNet will offer users typical speeds of 25 Mb download — which may not sound like much, but many of these users are stuck less than 3 Mb, and have no other options available today.

Travis Mooney-Evans, Principal Consultant for Developing Infrastructure, designed the project and will serve as XtndNet’s CEO.

Coverage is assured by Ka and Ku beams on Arabsat BADR-7, with both European and African footprints.

“We looked for a way to differentiate our satellite capacity, and the XtndNet project was innovative,” said Dr. Badr Alsuwaidan, Acting President and CEO of Arabsat. “Developing Infrastructure and Forsway brought something new, and we are proud to be the satellite operator to power the solution.”

The XtndNet network offers several technical benefits, starting with an up to 20x improvement in download speeds, lower latency than traditional satellite broadband, greater resilience due to use of multiple network paths, and a simple installation — no more complicated than installing satellite TV.

“There’s a lot of talk about satellite’s integration into 5G, which is great if you have deep pockets and want ubiquitous coverage,” said Tobias Forsell, CEO of Forsway. “But for regular people who struggle with any sort of connectivity, that’s a pipe dream. The XtndNet service provides something that makes their life better today, enabling the services that people depend on day-to-day.”

XtndNet is currently taking orders for service throughout the UK and Ireland, and will accept pre-orders for all service regions. See https://xtndnet.com for more information.

Operating a growing fleet of owned satellites at the 20°E, 26°E, 30.5°E and 39°E Arabsat is the only satellite operator in the MENA region offering the full spectrum of Broadcast, Telecommunications and Broadband services. Our capacity continues to expand with the launching of new satellites, making Arabsat’s satellites fleet the youngest in the region. Arabsat also maintains strategic partnerships with most of the world’s leading satellite companies and VAS integrators. Hellas Sat, one of the leading telecom groups in south-eastern Europe, has also been integrated into Arabsat’s operations. Further details can be found on www.arabsat.com.

Developing Infrastructure is a group of professional consultants focused on telecommunications and other infrastructure services in the developing world. With decades of experience in Africa, the Middle East, Asia, and Latin America, the team has deep roots in both satellite and terrestrial telecoms, and a network of local partners offering a presence in more than 140 countries. For further information, please see our website: https://developinginfra.com, and follow us on Facebook, and Twitter (@developinginfra).

XtndNet was founded by a group of internet, satellite and telecom professionals from the US, Scandinavia, UK, and mainland Europe — who have come together to solve the long-standing challenge of under-connectivity. Out team harnesses decades of learning and experience — from technology development and sales, ISP operations in emerging and established markets, as well as running businesses in both start-ups, Nokia, Ericsson, and major satellite operators globally. For further information, please see our website: https://xtndnet.com, and follow us on Facebook, LinkedIn, and Twitter (@xtndnet).

Q: How does XtndNet help resellers/ISP partners succeed in their market(s)?
A: XtndNet helps ISPs reduce churn through a zero-Capex access platform, available immediately. XtndNet can be offered as an ‘add-on’ or to ‘boost’ existing broadband offerings. XtndNet can also be tapped by Video-OTT service providers struggling today with poor connectivity.

Q: How will XtndNet benefit end-users?
A: XtndNet is an easy-to-use, revolutionary connection for underserved areas. We offer five-star customer service, with an affordable, always available broadband connection. Our 12 Gigabit Space Superhighway is powered by satcom leader Arabsat.

Q: Where will the new service be offered?
A: XtndNet is using Arabsat’s BADR-7 satellite which has coverage of the following European countries: UK, Ireland, Germany, Austria, the Baltics, Norway, and Sweden. There is also partial coverage over other countries. In Africa, XtndNet will employ Ku-coverage over North-West and West Africa, and Southern Africa.

Q: What will be the download speed, the delay or latency?
A: Download speed will be up to 25 Mb which provides capacity for end-users to enjoy high-value content such as video streaming services. There is also the possibility to have up to 50 Mb. XtndNet will employ satellite for downloads and boosting DSL and other terrestrial networks, whilst the return traffic always will use the terrestrial networks. This will give our service a huge advantage compared to existing bi-directional satellite internet services: a decrease in 300ms for latency.

Q: How will a reseller or ISP leverage from the XtndNet service?
A: XtndNet services can be seamlessly offered as a complementary service to end-users lacking robust connectivity, creating “stickiness” factor for underserved users. No investment in infrastructure is required. Billing, provisioning, and specialist end-user support are included. XtndNet also provides resellers and ISPs sales & marketing, technical and operational support to launch their local services.

XtndNet provides individual wholesale satellite broadband internet access services to resellers (e.g., DSL providers), which may be taken to market by the reseller under their own brand. It’s a one-way service via Satellite using existing broadband services for the return channel requests. It is based on capacity on Arabsat’s BADR-7 satellite, combined with existing return channel technologies depending on the service area. The service is offered as a one-stop shop for terrestrial providers to improve rural broadband performance. BADR-7, made by EADS Astrium, was launched in 2015 and operates at the orbital position of 26 degrees East. The satellite uses several Gateway locations, which are all based in Europe. The gateways bridge terrestrial broadband services with the satellite via well-equipped ground stations using Ka and Ku band.