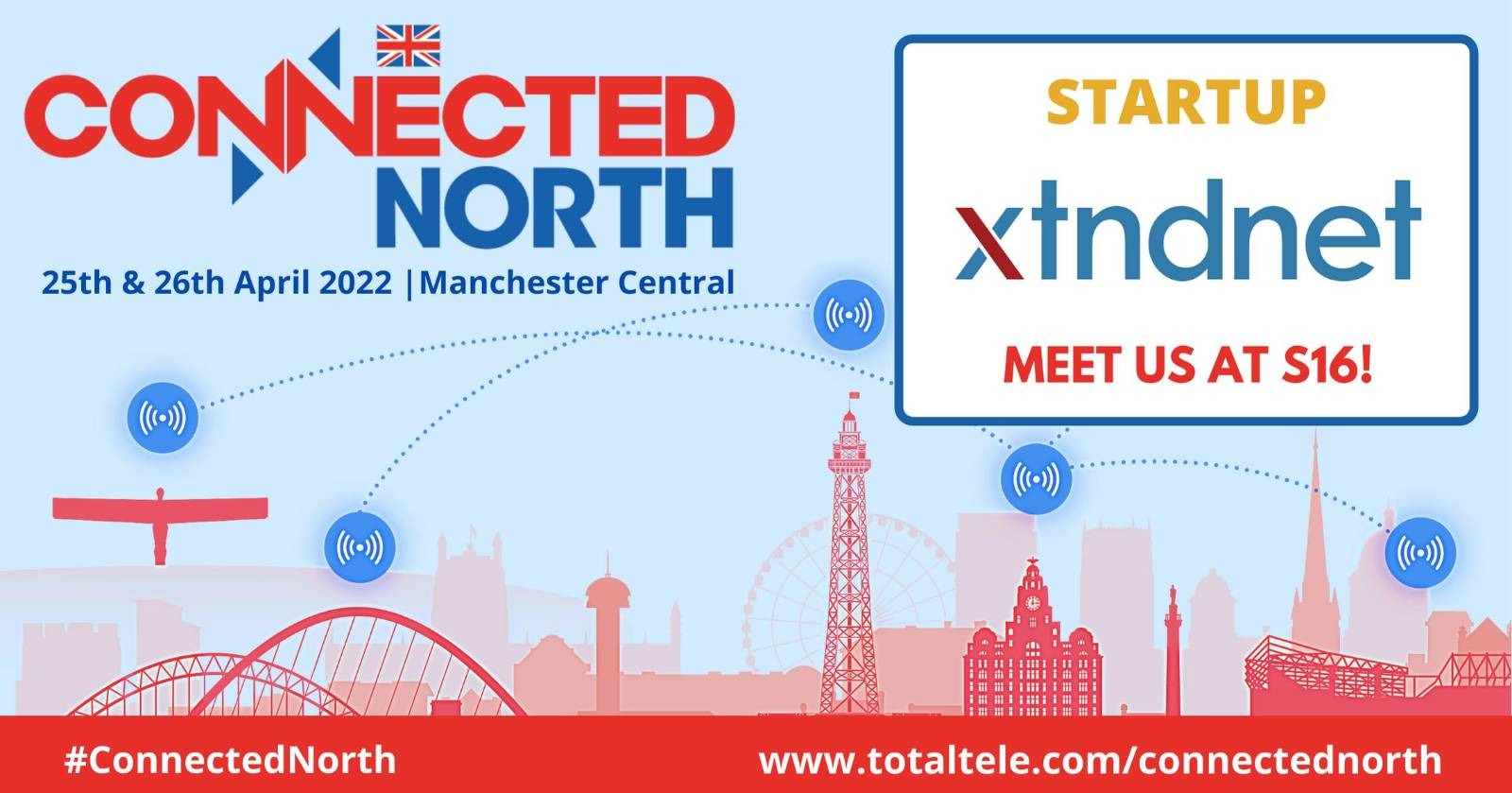 XtndNet, a radically new ISP bringing high speed broadband to rural locations in the UK and beyond, is today announcing it will be introducing its newly launched benchmark hybrid satellite service for rural and under-connected properties at Connected North Conference & Expo, Manchester, UK, April 25th-26th.

With a focus on connectivity as an essential component for ensuring economic and social prosperity, the XtndNet team will highlight how to close the digital divide in the UK by delivering next-generation networks in every corner of the UK, at an affordable price.

A sister event to Connected Britain, the event brings together leading speakers and industry players in an opportunity for the region’s connectivity leaders to explore the most important regional issues around enabling the connected future of the region.

At Connected North, XtndNet, the new, disruptive ISP and specialist in enabling broadband connectivity in underserved demographics will highlight:

A radical, new ISP bringing high speed broadband to rural locations in the UK and beyond, XtndNet was founded by a group of internet, satellite, and telecom professionals
who have come together to solve the long-standing challenge of under-connectivity. Our team harnesses decades of learning and experience — from technology development and sales, ISP operations in emerging and established markets, as well as running businesses in both startups, Nokia, Ericsson, and major satellite operators globally. For further information, please see our website xtndnet.com, and follow us on Facebook, LinkedIn, and Twitter.

Q: How does XtndNet help resellers/ISP partners succeed in their market(s)?
A: XtndNet helps ISPs reduce churn through a zero-Capex access platform, available immediately. XtndNet can be offered as an ‘add-on’ or to ‘boost’ existing broadband offerings. XtndNet can also be tapped by Video-OTT service providers struggling today with poor connectivity.

Q: How will XtndNet benefit end-users?
A: XtndNet is an easy-to-use, revolutionary connection for underserved areas. We offer five-star customer service, with an affordable, always available broadband connection. Our 12 Gigabit Space Superhighway is powered by satcom leader Arabsat.

Q: Where will the new service be offered?
A: XtndNet is using Arabsat’s BADR-7 satellite which has coverage of the following European countries: UK, Ireland, Germany, Austria, the Baltics, Norway, and Sweden. There is also partial coverage over other countries. In Africa, XtndNet will employ Ku-coverage over North-West and West Africa, and Southern Africa.

Q: What will be the download speed, the delay or latency?
A: Download speed will be up to 25 Mb which provides capacity for end-users to enjoy high-value content such as video streaming services. There is also the possibility to have up to 50 Mb. XtndNet will employ satellite for downloads and boosting DSL and other terrestrial networks, whilst the return traffic always will use the terrestrial networks. This will give our service a huge advantage compared to existing bi-directional satellite internet services: a decrease in 300ms for latency.

Q: How will a reseller or ISP leverage from the XtndNet service?
A: XtndNet services can be seamlessly offered as a complementary service to end-users lacking robust connectivity, creating “stickiness” factor for underserved users. No investment in infrastructure is necessary. Billing, provisioning, and specialist end-user support are included. XtndNet also provides resellers and ISPs sales & marketing, technical, and operational support to launch their local services.

Additional details
XtndNet provides individual wholesale satellite broadband internet access services to resellers (e.g., DSL providers), which may be taken to market by the reseller under their own brand. It is a one-way service via Satellite using existing broadband services for the return channel requests. It is based on capacity on Arabsat’s BADR-7 satellite, combined with existing return channel technologies depending on the service area. The service is offered as a one-stop shop for terrestrial providers to improve rural broadband performance. BADR-7, made by EADS Astrium, was launched in 2015 and operates at the orbital position of 26 degrees East. The satellite uses several Gateway locations, which are all based in Europe. The gateways bridge terrestrial broadband services with the satellite via well-equipped ground stations using Ka and Ku band.